Kyocera has been a pioneer in developing innovative solar power solutions for over 40 years. During this time, Kyocera has set the standard for harnessing the Sun’s energy with highly reliable and high quality, best-in-class technology ― having produced an accumulated 8 gigawatts of solar power generating equipment to date.
High-Quality Solar Modules since 1975

Kyocera's multicrystalline silicon solar modules were the first in the world to pass all "Long-term Sequential Tests"* performed by TUV Rheinland Japan Ltd. (based in Germany) - a highly-respected third-party institute that evaluates the quality and reliability of solar modules.

* The Long-term Sequential Test is even more stringent than conventional testing which follows the international standards set by the International Electrotechnical Commission (IEC). This test continuously examines the overall quality and performance of a solar module for roughly one year. Certified in January 2011. 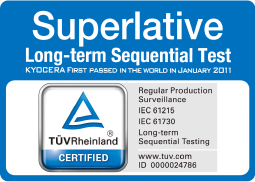 Kyocera has been recognized as a "top performer" across all test categories for its solar modules by DNV GL (formerly PV Evolution Labs), an international provider of independent expert advisory and certification services, in its 2016 PV Module Reliability Scorecard released March 2016 in collaboration with GTM Research. 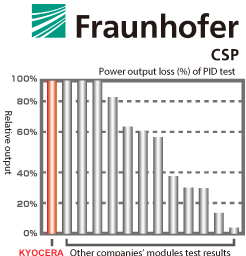